Collaborations between the lab and the clinic are of vital importance for focused cancer research that can benefit patients. More and more lab researchers and oncologists at the NKI are starting to team up. We are proud to introduce the second duo: Karin de Visser and Marleen Kok, a research duo looking into immunotherapy for breast cancer. 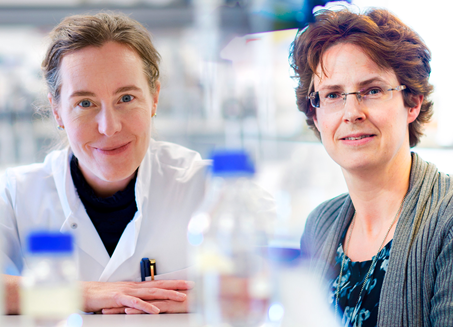 Fundamental clinical synergy
“How would you describe our collaboration?” researcher Karin de Visser and physician Marleen Kok asked the members of their teams as soon as they heard that they were going to be interviewed the following day. “One of our team members described it as a fundamental clinical synergy,” says Marleen Kok. “Our collaboration is not just a matter of one and one is two – for us, one and one is three. Through the right scientific research, we hope to be able to speed up improvements at the clinic.”

Breast cancer
Initially, their collaboration didn't seem self-evident. “Ten years ago, you were one of the first scientists at the NKI to work on immune cells in breast cancer. I had just finished my training at the institute and mainly focused on the possible reasons why some people didn’t respond to certain breast cancer treatment. We initially thought these two things were completely separate research fields,” Kok shares. Six years later, after completing her residency programme, the link between treatment and the immune system suddenly seemed much more obvious. “I think that’s when we both started focusing on the same question: how can we use the immune system to treat breast cancer?” Karin de Visser says.

Who responds to immunotherapy, and who doesn’t?
When Kok moved to the US to work at a world-renowned lab, the two breast cancer specialist barely kept in touch. Karin often asked her colleagues when she would be back. “I was so eager to discuss everything she had learned.” Directly after Marleen Kok’s return to the Netherlands, the two of them wrote their first funding application for KWF, the Dutch Cancer Society. “That is one of our characteristics: we like to take action immediately,” Kok explains. They received the funding. De Visser: “That allowed us to hire an analyst to join our shared team, which currently consists of four people. We analyse blood samples taken from women with breast cancer every day to find out who does and who doesn’t respond well to immunotherapy.”

Powerful interplay
Kok’s and De Visser’s teams work diagonally across from one another. They share labs and often study the same patient’s blood sample. “Whenever Marleen stumbles upon unexpected results during one of her immunotherapy treatment, we head back to the lab to figure out why it happened. And whenever I come across any fundamental improvements in my lab, I can immediately use a blood sample to test the way a patient might respond. It is a very powerful interplay,” according to De Visser.

“Karin’s greatest strength is her broad view. She helps me implement the latest technologies on our blood samples. If it weren’t for her, I would never have gone beyond what’s at the surface,” Kok adds. De Visser: “Marleen thinks outside the box. She is open to new scientific discoveries and loves plunging into the unknown.”

Improving immunotherapy treatment for breast cancer
Their intensive collaboration has already lead to the discovery of a new type of immune cell that may play a role in a favourable immunotherapy response in breast cancer patients. Together with their teams, they now research how these immune cells operate, why they are so important, and whether there are similar processes found in other cancer types like melanomas, colorectal cancers, or bladder cancer.

“Once we know how to activate these immune cells in patients whose cells are inactive, through a certain type of protein or by including a growth factor, we can use our findings to treat our patients and improve immunotherapy treatment,” De Visser says. She concludes: “Once you’re brave enough to invest together and spend years conducting as many experiments as possible, there will, one day, be an unexpected finding that may lead to great things for your patients.”