Karin de Visser, group leader in the department of Tumor Biology and Immunology at the Netherlands Cancer Institute, has been elected as a member of EMBO, the prestigious international organization of leading researchers in the life sciences. 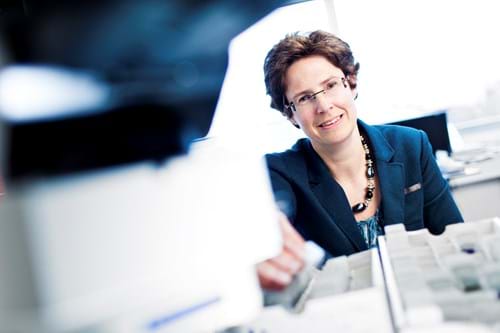 "It is a great honor to be elected as an EMBO member”, says Karin de Visser. I look forward to joining the vibrant scientific EMBO community and to participating in the EMBO programs. Also, I am excited about the novel networking opportunities offered by the EMBO membership."​

Karin de Visser's research focuses on the complex interplay between cancer and the immune system, with a focus on breast cancer. One of the problems she investigates is what role the immune system plays in cancer metastasis and therapy resistance, and how we can control these processes.

Karin de Visser is also a professor of experimental immunobiology of cancer at Leiden University/LUMC and leads a research group in Oncode, where she is also a member of the Research Management Committee. Among other things, she acquired a Vici grant, an ERC Consolidator Grant, and research funds from the Dutch Cancer Society. Karin de Visser was also an EMBO young investigator from 2016-2019.

EMBO aims to promote excellence in the life sciences and support talented researchers at all stages of their careers.