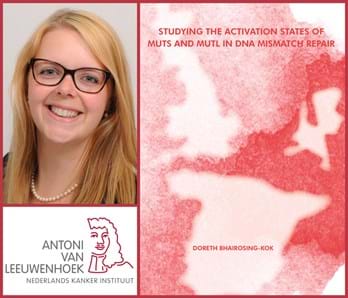 “Imagine if you took three pictures of a child who is lying down, then sitting up, then standing. You will have a kind of video of a child getting up. That’s exactly what we did for my PhD research into two proteins that scan our DNA to try and fix errors. One of these proteins inspects a DNA strand that has multiplied. By pressing down on it with its ‘fingertips’, it can detect weaknesses: transcription errors. Using a microscopy technique used to view plunge-frozen preparations, cryo Electron Microscopy, we could take pictures of the various states of these proteins called MutS and MutL. This helps us understand how they work. That’s important, because malfunctioning proteins could lead to cancer – in the intestine or other tissue where cells often divide. My research was fascinating, but I still decided to leave science behind. I now organize the distribution of research grants as a program officer at the Dutch Research Council NWO.” Doreth will defend her thesis on January 29.

Practical information about this defense