Cancer cells lack a checkpoint: without checking whether everything is ready for cell division, cancer cells start replicating their genetic material. This means that the replicating cancer cells often encounter replication stress. I researched the ways in which cancer cells manage to survive despite this stress.

Once we can find out how that works, we may be able to find a therapy to halt their growth. It was very interesting to me – and the best part: we succeeded. As it turns out, there is one specific protein that plays an important role in uninhibited successful cell division. Unfortunately we don’t have a system to observe the role of this protein in great detail.

I’m currently developing such a tool in my new job at the University of Copenhagen. It was a great opportunity for me to be able to join this university: I can conduct research that interests me at a great institute. And I will soon start my Danish courses!” 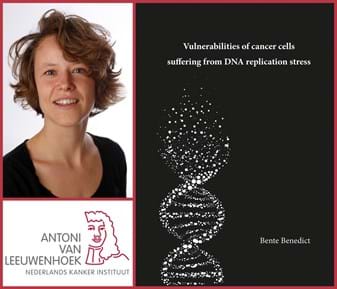 This provided a novel rationale for the frequent co-occurrence of Rb and p53 pathway inactivation in the process of tumorigenesis; loss of p53 does not only attenuates cell cycle arrest or apoptosis, but also reduces replication-stress induced DNA damage.

However, mitogen-independently proliferating TKO-Bcl2-p53KO MEFs still experienced replication stress, depicted by slow replication and sensitivity to inhibitors of the DNA Damage Response. To identify mechanisms that are essential for mitogen-independent proliferation, Bente performed an shRNA drop-out screen and identified a critical role of the helicase RECQL in preserving the integrity of stalled replication forks by preventing MRE11-dependent DNA breakage.

WAPL
Another protein she found to be essential for mitogen-independent proliferation is the cohesin-antagonist WAPL. WAPL promotes RAD51-dependent repair and restart of broken replication forks at the expense of sister chromatid cohesion. In collaboration with the Oncogenomics group of Rob Wolthuis at VUMC-CCA, she also observed that cohesion loss is frequent in cancer cells and that induction of replication stress is sufficient to trigger cohesion loss in untransformed cells. Also the cohesion-loaders NIPBL and MAU2 were required for cell growth in replication stress conditions. However, unlike WAPL, they were not essential for the restart of broken replication forks.